UPDATE: Welcome to any readers and listeners from the Sherlock Holmes Society of London! You can listen to this episode on the built-in player below the post, or you can subscribe via your favo(u)rite podcasting service, or via iTunes. Take a look around, enjoy, and don’t forget to leave some feedback on the form here. 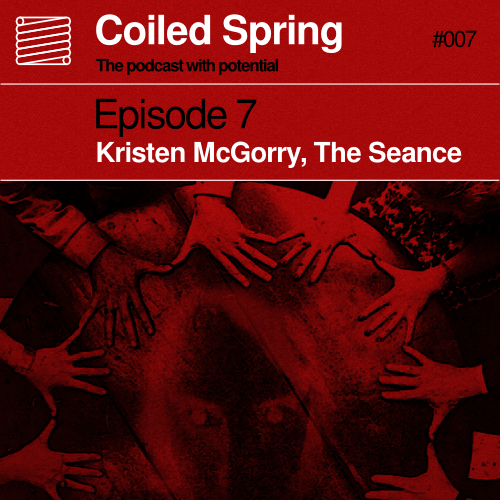 THIS PROG: Friend of the show and playwright Kristen McGorry is back in town, so we took this opportunity to preview her new play, The Seance.

It’s currently in rehearsal by my old crew in Wimbledon, the Carlton Dramatic Society. But the Coiled Spring is very pleased to be able to present you with a sneak preview of the thrills and chills to come.

We also chat a load of shit about the usual things, and I also review Pinwheels, a tasty and widely available cookie treat. It’s not so much “Matthew reviews American cultural artifacts” now as much as “Matthew eats biscuits and records it”.

I tried to record a Skype conversation with an interviewee, but for some reason, I couldn’t get the otherwise-great Audio Recorder to record Skype. When I clicked ‘Start Recording’, it would change the button to ‘Continue Recording’ and just sit there. Later on, Skype crashed anyway. That’s what happens when you have proprietary app with closed code wrapped up to try to work on Linux.

Much as I would love it if all my guests used a SIP client (like Ekiga), I don’t think I can expect people to set that up, register for a username and so on – that’s more than I can hope for. Many people already have a Google account, so what I can hope for is for them to follow the steps below, so we can have a chat that plays nicely with Audio Recorder.

That takes care of he two people chatting. What about recording them? 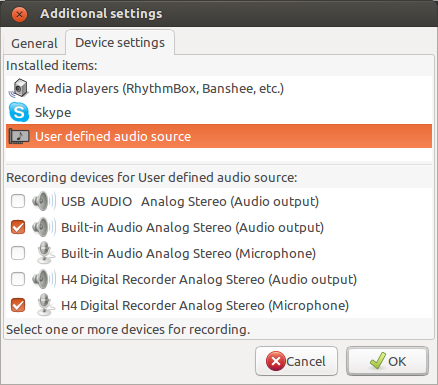 Setting up the sources to record 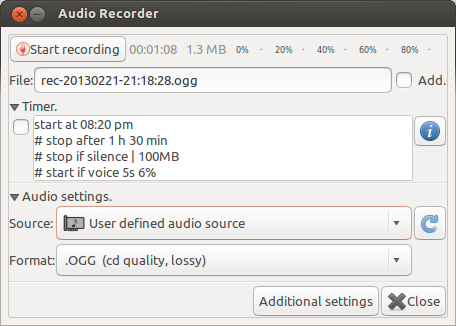 I used this method in Episode 6, when I interviewed Robin Deacon – him in Chicago, me in Oakland. There are a couple of issues with the results. Firstly, the sound from the remote party sounds a little distorted and compressed. I don’t know what causes that, except for the fact that it’s a stream of audio coming live over the net. Maybe if I switched off the video stream, it would improve the audio.

Secondly, when I spoke, it would duck out the remote part of the audio – it would silence it and “push it out of the way” – I don’t know how to describe it. This meant that it was hard to have a natural conversation with the subject, because I couldn’t talk over him for fear of ruining the audio. Combine that with my still-primitive (but improving!) interview technique, and I’m not 100% happy with the results. It was a great episode though, and it’s good to have another way to record a remote conversation.

Because some of my future guests on the podcast are not local, I will be interviewing them via Skype. But how to record that? There are various ways.

I could record my side of it, get the guest to record the other side, then combine them in Audacity. This would only work with forward planning, and with a willing interviewee. In addition, the sound files may start out sync’d up, but may drift out and would need lots of editing just to line up. Never mind the second phase of cutting out all my croaks, “Um”‘s and so on. No thanks.

I could record the sound of my voice, and the sound of the other person coming out of the speakers, or with the line-in on the Zoom. Now one half sounds good, and the other doesn’t, and I’d have to edit it all so the levels matched up. No thanks, either.

Luckily, there is a fantastic little tool called Audio Recorder which allows you to set it up so it records any sound coming out of (or going into ) your computer. This includes Skype, and you can set it so that whenever you make a call, or a call comes in, the recording starts (including the distinctive Skype ringtone if you want). By default, it records to an OGG file, with a filename consisting of the date and time, ready to be imported into Audacity for editing.

Because Audio-Recorder can record any sound coming out of the computer, it’s great for grabbing sound effects, samples from clips on YouTube (such as this one, or this one), even entire songs when necessary.

Another great use – when I have the Zoom connected to the computer as a USB microphone (as described previously), I use Audio Recorder to quickly record to an OGG file directly on the computer, via the Zoom’s superior microphones. I don’t like recording directly into Audacity – I prefer to have a separate file I can then import. The tray indicator allows me to easily and quickly start and stop recording, and the files are automatically saved with a filename made up of the date and time.